We were lucky to have a wonderful, sunny day for for day visit to the Great Orme - the limestone, peninsular (small) mountain  just west of Llandudno.


The Great Orme is known for rare or unusual flora, butterflies and seabirds. The first flower most of us were unfamiliar with was Dropwort. Not nationally rare, but predominantly a southern and eastern species. Sometimes known as downland Meadowsweet, indicating the typical distribution, and also that is is a member of the rose family.

Another flower soon seen on exposed rocky areas, which is nationally scarce, is Hoary Rock-rose. It is smaller than the Common Rock-rose, with narrower leaves and noticeably downy.
Another rose, probably Burnet Rose, was found in similar locations.


One of the landscapes of the Great Orme is limestone pavement, with clints and grykes. The grykes provide sheltered habitats in an otherwise very exposed location. 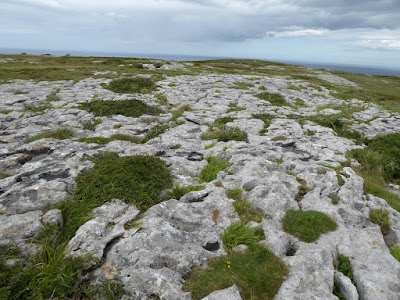 One species that is widely distributed throughout the country, but not necessarily expected in this environment is wild privet, taking advantage of the shelter offered.

Others which enjoy such places include Maidenhair Spleenwort

and Dog's Mercury, more typically seen in a woodland environment.

We following flower gave difficulty in identification. The whorled leaves suggest a bedstraw, but it is not obviously one with which we are familar. About 2 feet tall and quite robust. However there a few hybrids, and Galium pomeranicum, a hybrid between Lady's Bedstraw and Hedge (or Upright) Bedstraw looks plausible.
Other plants noted were: Common Stork's-bill, Thyme, Bird's-foot Trefoil, Salad Burnet, Heather, Tormentil, Eyebright, Milkwort, Quaking Grass, Germander Speedwell, Thyme-leaved Speedwell, Fairy Flax, Thrift, Bulbous Buttercup and a Bedstraw.

One of the most well known rarities of the Great Orme is the attractive Silver-studded Blue butterfly. The name comes form the blue 'studs' occurring within some of the black spots on the underside of the wings, which can just be seen in this photo.

There is even an unusual mammal on the Great Orme. Admittedly this was introduced - its ancestors roamed the mountains of northern India. The goats were originally brought to England in the 1800s in order to produce cashmere woollens. It is not clear exactly when and why some were moved to the Great Orme, but there was an old Welsh farming practice of putting goats with sheep, hopefully resulting in the goats foraging in the most precipitous places and discouraging the sheep form doing so.
No photos of the birds, but one we particularly wanted to see was the Red-billed Chough (although it would have been even more interesting to see the yellow-billed Alpine Chough). It breeds in some coastal mountainous areas of the west coasts of Britain and Ireland, including the Great Orme. A few of us thought we heard a group flying over, but others were not convinced. However one was definitely seen later on the edge of the cliffs near the lighthouse. A Peregrine was seen nearby. Other birds seen were: Meadow Pipit, Stonechat, Jackdaw, Goldfinch, Swallows and Black-headed Gulls. A Lark was heard but not seen.

Overall a very successful and enjoyable day out.