A select group donned waterproofs for an evening at Dunham. A stroll from the Swan With 2 Nicks showed numerous Canada and Greylag Geese in the fields and a squirrel delicately balanced on the tip of one of the posts.  Very calm and quiet in the park itself. Over to one of the pools, where a surprising number of slightly unusual flowers were seen: Sweet Flag, Gypsywort, Skullcap and Marsh Pennywort.


Other plants in the pool included Purple Loosestrife, Water Mint, Great Willowherb, Bulrush, Marsh Woundwort  and Yellow Water-lily (both finished flowering). Mallards, coots and Moorhens were in or around the pool.

Numerous Fallow Deer and a couple of rabbits were seen while walking over to the lake nearer to Charcoal Road, with much tormentil in some of the boggy areas. A Green Woodpecker was heard but not seen. On the lake were a couple of Mute Swans and a female Tufted Duck.

We saw a couple of Crows and a dead, young Long-tailed Tit on the ground en route to the Clock Tower area.

Given the cloud cover, the light faded quite early, which was encouraging for bat watching. However the dampness did not encourage the insects that might attract the bats. Nevertheless at least one Pipistrelle braved the conditions to justify our waiting, and brought the bat detector to life, clicking vigorously but briefly (at about 50kHz).

So despite a little drizzle (it could have been much worse), it was an enjoyable evening - and much quieter than if it had been sunny.
Posted by AltNats at Tuesday, August 08, 2017 No comments:

A good turnout for the day excursion to the Sefton Coast. This time to Formby, instead of our more usual venue of Ainsdale.

An initial walk around the Red Squirrel reserve - where the residents were fairly relaxed and tolerant of visitors. Plenty of opportunities to see these attractive animals.

This reserve incidently provided our best view of helleborines special to the dune environments - Dune Helleborine:

While most of the specialities of this coastal area are found in the dune slacks, the woodland itself is very interesting, with trees stunted and sculpted by the harsh conditions and many pines closest to the sea looking like Bonsai trees. A birch 'tree' seemed to be successfully coping with the environment by adopting a creeping strategy rather than growing vertically. 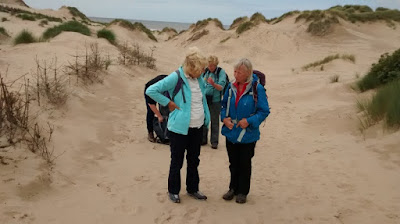 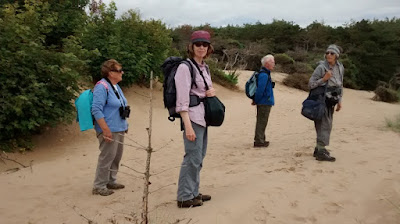 After refreshments from the squirrel cafe and ice cream van, some of the party continued towards Gypsy wood and some dune slacks to see if there would be anything different in these areas. It was surprising how many different plants were seen with an apparently small change in habitat. Also surprising were the patchy distributions - with a patch of Fat Hen; then Spring Beauty; then Polypody (Western Polypody, we think); then Corn Sow Thistle; then Common Valerian and Angelica; then Common Fleabane.

We were fortunate to have good weather after recent rainy days. An excellent day out, giving an indication of the great variety along the Sefton coast, if not the showy specialists in the Ainsdale dune slacks.
Posted by AltNats at Saturday, July 29, 2017 No comments:

We were lucky to have a wonderful, sunny day for for day visit to the Great Orme - the limestone, peninsular (small) mountain  just west of Llandudno.


The Great Orme is known for rare or unusual flora, butterflies and seabirds. The first flower most of us were unfamiliar with was Dropwort. Not nationally rare, but predominantly a southern and eastern species. Sometimes known as downland Meadowsweet, indicating the typical distribution, and also that is is a member of the rose family.

Another flower soon seen on exposed rocky areas, which is nationally scarce, is Hoary Rock-rose. It is smaller than the Common Rock-rose, with narrower leaves and noticeably downy.
Another rose, probably Burnet Rose, was found in similar locations.


One of the landscapes of the Great Orme is limestone pavement, with clints and grykes. The grykes provide sheltered habitats in an otherwise very exposed location. One species that is widely distributed throughout the country, but not necessarily expected in this environment is wild privet, taking advantage of the shelter offered.

Others which enjoy such places include Maidenhair Spleenwort

and Dog's Mercury, more typically seen in a woodland environment.

We following flower gave difficulty in identification. The whorled leaves suggest a bedstraw, but it is not obviously one with which we are familar. About 2 feet tall and quite robust. However there a few hybrids, and Galium pomeranicum, a hybrid between Lady's Bedstraw and Hedge (or Upright) Bedstraw looks plausible.
Other plants noted were: Common Stork's-bill, Thyme, Bird's-foot Trefoil, Salad Burnet, Heather, Tormentil, Eyebright, Milkwort, Quaking Grass, Germander Speedwell, Thyme-leaved Speedwell, Fairy Flax, Thrift, Bulbous Buttercup and a Bedstraw.

One of the most well known rarities of the Great Orme is the attractive Silver-studded Blue butterfly. The name comes form the blue 'studs' occurring within some of the black spots on the underside of the wings, which can just be seen in this photo.

There is even an unusual mammal on the Great Orme. Admittedly this was introduced - its ancestors roamed the mountains of northern India. The goats were originally brought to England in the 1800s in order to produce cashmere woollens. It is not clear exactly when and why some were moved to the Great Orme, but there was an old Welsh farming practice of putting goats with sheep, hopefully resulting in the goats foraging in the most precipitous places and discouraging the sheep form doing so.
No photos of the birds, but one we particularly wanted to see was the Red-billed Chough (although it would have been even more interesting to see the yellow-billed Alpine Chough). It breeds in some coastal mountainous areas of the west coasts of Britain and Ireland, including the Great Orme. A few of us thought we heard a group flying over, but others were not convinced. However one was definitely seen later on the edge of the cliffs near the lighthouse. A Peregrine was seen nearby. Other birds seen were: Meadow Pipit, Stonechat, Jackdaw, Goldfinch, Swallows and Black-headed Gulls. A Lark was heard but not seen.

Overall a very successful and enjoyable day out.

While the gardens were managed to provide a wonderful display of varied flora and trees, a few species were spotted that may have found their own way there. One such was Fringe Cups, a member of the saxifrage family. A few years ago, this seemed notable when spotted growing in the wild, but it now seems to be spreading quickly - we had seen in quite a few locations recently.

Something else that seemed to have found its own way here, and is now becoming more common is the Rose-ringed (or Ring-necked) Parakeet. It also brings controversy, particularly as it has been suggested that it may affect the populations of other birds which nest in holes in trees - by taking over such properties. However it is not yet clear how much they affect other species.
In some large lime trees near the entrance to Parsonage Gardens, large clumps of mistletoe can be seen. This is an unusual sight in the Greater Manchester area - we are aware of only about half a dozen sites in the area with mistletoe. Let us know if you find more.
We spent much time in the 'formal' garden areas, although we were too late to see the fritillaries on full flower. We then took a short walk into the wilder areas of Stenner Woods and Millgate Fields. A Grasshopper Warbler had been reported but we did not manage to see or hear it. A Heron was mobbed by crows. Other plants noted include: Ladies Smock, Green Alkanet, Spring Beauty, Marsh Horsetail, Marsh Marigold, Great Bittercress, Lesser Stitchwort, Wood Stitchwort, Pick-a-back Plant (Tolmiea menziesii - another member of the Saxifrage family), Three-cornered Leek, Pendulous Sedge, White Dead-nettle and Ramsons.

A very pleasant evening, with much of interest, both in the gardens and the wilder woodland.
Posted by AltNats at Tuesday, May 09, 2017 No comments:

Bullfinches nesting in conifer in garden.

Numerous Goldfinches at (nyger seeds) feeder.
Orange-tip butterfly in garden.
Great Tits pecking at fence slats - unclear what they are after.
Blue Tits taking material to nest box for a couple of hours, but not seen again.
Cathy and Mike Pettipher
Posted by AltNats at Tuesday, April 18, 2017 No comments:

Ring-necked Parakeets have returned to the feeders (with sunflower seeds) in a Timperley garden.

12 Black-necked Grebes and a Marsh Harrier.

Michael Laurent
Posted by AltNats at Saturday, April 15, 2017 No comments: